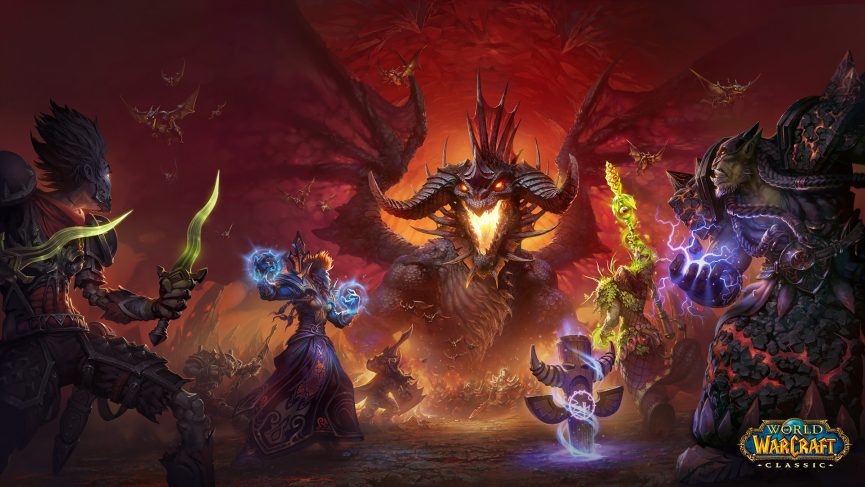 In my previous post, I mentioned that I wanted to get attuned to the Onyxia raid in World of Warcraft Classic. With the help of some of my guild mates in Inspire, I managed to do this relatively quickly and have since joined them to kill Onyxia on at least 3 occasions now.

Killing Onyxia is really easy and as such the guild is usually split into 2 teams of roughly 20 people which effectively doubles the loot the guild receives. The last time I killed Onyxia was in team 2 earlier in the week, which I recorded.

The fight is split into 3 phases. In phase 1 you can see in the video that the whole raid group went right and followed a path which would avoid tail sweep. We then gave the tank some time to generate threat before unleashing players who do high DPS (damage per second).

In phase 2 Onyxia takes flight and the raid group is effectively split in two, in our case players in odd groups (1 and 3) stay on the right hand side and players in even groups (2 and 4) move to the left hand side. Because I am in group 1, I stayed where I was. During this phase, players who are ranged DPS will do as much damage to Onyxia as possible while the melee DPS will handle whelps which spawn on both sides. At the same time, players will try to spread out to reduce damage from fireballs and avoid deep breath which in our case a raid member calls out in Discord.

At 40% health phase 3 will start, Onyxia will land and all DOT’s (damage over time) spells and abilities are stopped beforehand to make it easier for the tank to pick up threat and position Onyxia facing the back of the raid. During this phase all players try to avoid cracks on the ground which periodically spout fire, while avoiding the tail and head (with the exception of the tank). Periodically, Onyxia casts bellowing roar, fearing every raid member, making it important for priests to fear ward the tank so that Onyxia will not move with the tank which could potentially cause problems with her facing raid members or tail sweeping players who are ordinarily in a good position.

One final thing to mention is that it is really important not to generate too much threat during phase 1 and 3. It sounds simple, and applies to just about any encounter in World of Warcraft, but you will see in the video that somehow Onyxia turned, killing several raid members. At first glance this looks like it could have been because the tank lost threat, although the log of the encounter shows our tank didn’t lose it. The same thing could easily have happened if the tank is feared and Onyxia turns to face other raid members. Regardless of what happened, luckily, I survived, and Onyxia was almost dead anyway. For anyone who has not completed the Onyxia raid, I recommend reading the Onyxia’s Lair raid guide on Wowhead classic which will give a more detailed explanation of the encounter.