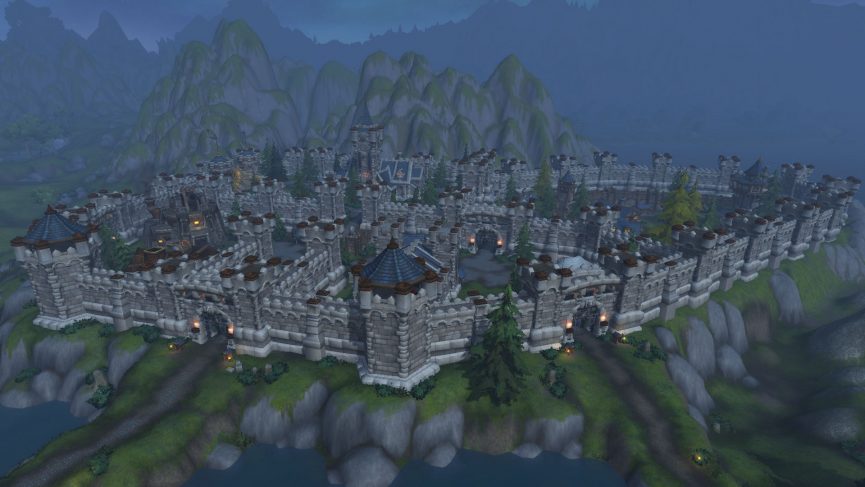 Yesterday I experienced the new World of Warcraft warfonts content for the first time in Arathi Highlands. Alliance controlled the warfront and I was able to complete all of the quests relatively quickly on my Druid and Paladin which earned me some war resources and an ilevel (item level) 340 piece of armour for each character. Next week the Horde should control the warfront which will mean that I will be able to play the other side of the new warfront content where I will be able to farm materials and craft items to hand in for reputation and other rewards.

So far I actually quite like this new pve (player vs environment) alliance vs horde style to the game. I will be especially interested in playing it while the horde control the warfront. I really like the makeover Arathi Highlands has had in general and the Alliance controlled Stormgarde Keep featured above looks amazing.

As well as the quests there are a number of rare bosses which have a chance to drop ilevel 340 armour. Unfortunately for my druid she got one of these which also happened to also be exactly the same as the quest reward at the end. There is also an epic world quest boss ‘Doom’s Howl’ which is a sort of horde tank. It has a chance to drop item level 370 armour although I did not get any. I hope to see more warfront content in other areas of the game with more quests and things to do. It is good that I am starting to see some new content to the Battle for Azeroth expansion but because the content took me about 30-45 minutes to complete, I am not that impressed. With that said I can see a lot of potential and have high hopes for what warfronts will bring in the coming months.