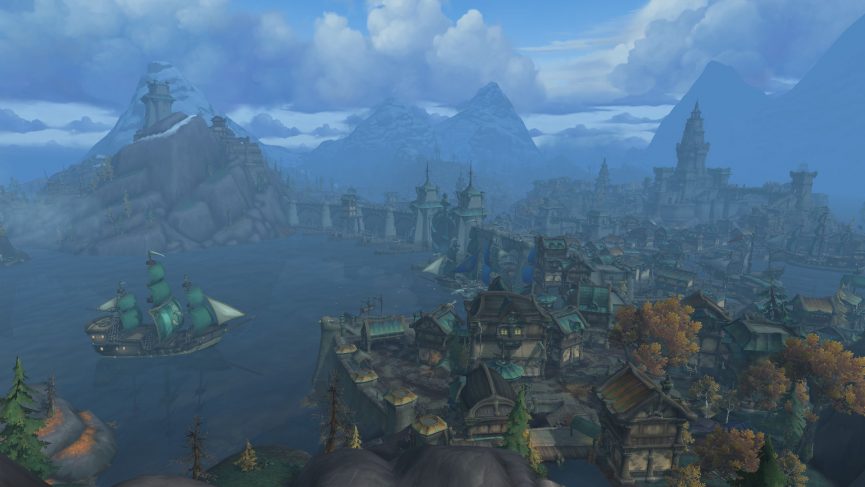 Having spent a lot of time both last weekend and this weekend playing the new Battle for Azeroth expansion for World of Warcraft, I feel I can now share my first impressions.

So far I have levelled my Paladin to level 120 and started my Druid getting it to level 114. With the Paladin I have also, as far as I can tell, completed most or all of the quests in two areas and have made a start on the quests in all remaining areas.

My first impression, I have to say, is largely negative. The main reason for this is that I have found very little that is new and unique for the expansion so far.

With The Burning Crusade we first saw flying mounts and the ability to fly in Outland. The Outland zones were also completely different to what vanilla Warcraft had given so far and, for the first time, we shared a city (Shattrath) with the opposite faction. There were two new races, Blood Elf and Draenei plus the alliance could have the shaman class which was exclusively a horde class, while the horde could use the paladin class which was exclusively alliance.

Wrath of the Lich King had a completely new class, the Death Knight. Wintergrasp was the first world zone dedicated to large scale PvP which unlocked a raid for the faction that held/took it. Phasing was also introduced with the Icecrown zone.

Cataclysm revamped much of the Vanilla content and featured the first underwater and subterranean zones (Vashj’ir and Deepholm). Pet battles were introduced along with archaeology and two new races, Goblin and Worgen.

Mists of Pandaria had a new class, Monk and a new race (Pandaren) which for the first time is for both horde and alliance. The overall feel for the zones was also relatively new with an oriental/Asian feel to them all. Using individual player phasing, there was also a farm which each player could see grow and improve over time and effort. There was also the start of a legendary quest string which rewarded more and more as the expansion went on.

Warlords of Draenor is perhaps the worst expansion of all time in World of Warcraft. I know a lot of players did not like it, but there was player housing for the first time in the form of a garrison. You could then recruit followers and send them on missions, choose buildings and upgrade your keep as you played.

After the dreadful Warlords of Draenor expansion, Legion turned things around with probably the most new featured expansion yet. There was a new Demonhunter class, scaling so that the enemies matched your level whichever zone you were in (apart from Suramar until level 110). There was a Artifact weapon for each class and spec, world quests and a chance of getting a legendary item by performing more or less any task.

All of the above are not necessarily new things to gaming or things which I like. They were however new to World of Warcraft at the time and were more or less available from the moment you started playing the expansions.

From what I can tell so far, Battle for Azeroth has given boat rides, (in addition to flight paths) and new playable races for each faction. There is the Azerite neck item which connects to armour items which will give abilities depending how much power you have accrued. This for me is so similar to artifact power, I am not sure it can be considered as new. Even the zones don’t seem new, there is a spooky zone, old farmland zone, brighter hilly zone, troll like zones, desert, all of this I have seen since vanilla Warcraft. This has left me feeling rather underwhelmed, especially after an expansion with so many new features, all of which were available immediately.

Don’t get me wrong. I have for the most part enjoyed the expansion so far, and, at the end of the day, it is still World of Warcraft and many of the above features (some I like, some I don’t like) are still available. I just wish there was something really new and exciting to the game.

These are however first impressions. Going forward, I hope to discover something which is genuinely new and something I can get my gaming teeth into. If not, I am sure I will enjoy the expansion all the same.