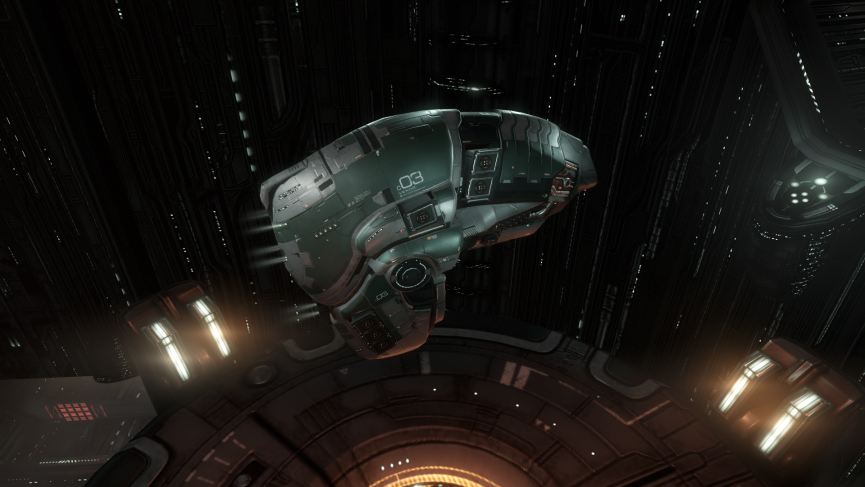 I recently wrote about playing EVE Online for free as an Alpha pilot and created a new character. Since then I have periodically been logging in to check on the progress of my new character and complete the odd mission or two.

While the Algos ship I used was fit for purpose, I have invested in a Vexor which is a cruiser class ship and one step up from the Algos. The Vexor is so versatile and can complete so much of the PvE (Player vs Environment) content that this has been my most used ship over the years. Fitted and piloted properly, in high security space the Vexor can easily complete just about any combat site and escalation. This, in my view, yields high reward for low risk. Also, if searching for combat sites is not your thing, it can complete level 1, 2 and 3 missions with ease. It can also do most level 4 missions but I believe these are inaccessible for Alpha pilots.

The fitting and ethos I use is much the same as with the Algos in that I simply kite the enemy NPC’s (Non player characters) and let my drones do all of the work.

Low slots
Drone Damage Amplifier I x3 – The Vexor is primarily a drone combat ship, these are to boost the damage output of your drones as much as possible.

Omnidirectional Tracking Enhancer I – This enhances the range and improves the tracking speed of all drones.

Damage Control I – This is a passive boost to how much punishment your ship can take should it run into any trouble.

Mid slots
50MN Microwarpdrive I – This will give massive jolts of speed in order to get away from enemies and kite while your drones take them out. You can also use it to zone in on loot quickly but be careful to not use all of your capacitor.

Adaptive Invulnerability Field I – To compliment your shield resistances across the board, it will need activating and will use capacitor in small amounts. It can be left on indefinitely assuming you manage the microwarpdrive properly.

Large Shield Extender I x2 – In conjunction with the resistance boost from the invulnerability field and damage control modules, two of these will help you tank a lot of damage and will give plenty of time to get into a kiting position or warp away if necessary.

High slots
Core Probe Launcher I – To scan down cosmic signatures in order to find combat sites suitable for the Vexor. If you take a mobile depot it is also possible to swap out a mid slot shield extender for a data or relic analyser should you scan down data or relic sites. One thing to note is that while most combat sites will allow cruiser class ships to enter them, some only accept smaller frigate and destroyer class ships.

Drone Link Augmentor I – This will increase the control range of your drones. With low character skills, your targeting and drone control range should be about 60km.

Rigs
Medium Drone Durability Enchancer – While drones are inexpensive, it’s worth having, especially if and when your character can use more expensive tech II drones.

Medium Processor Overclocking Unit I x 2 – All of the above fittings use a lot of your ships CPU (Computer Processing Unit). These rigs increase your CPU output so you can equip all of these fittings.

Drones
Hobgoblin I x9 – These deal thermal damage which is good against Serpentis and rogue drone targets.
Hammerhead I x5 – Slower than the Hobgoblin but pack a better punch and are ideal against enemies in cruiser class ships or bigger. They also do thermal damage and are medium drones.
Ogre I – Just one of these. They are very slow but are durable and are good at hitting the largest of ships. This too will do thermal damage and is a heavy drone.

Note: Swap out drones depending on the type of enemies you will be facing. Thermal damage is not so good against Angel Cartel for instance and you should take drones which do explosive or kinetic damage. If you do take the wrong drones, it’s not the end of the world, it will just take longer to kill them.

Charges
Core Scanner Probe I x16 – These are the probes required to operate the probe launcher and scan down cosmic signatures.

The ship including all of the modules, drones and charges currently costs between 11 and 12 million ISK (The in-game currency). This may sound like a lot but it really isn’t. It would take anything between 10 minutes and 2 hours to earn this much with the Algos detailed in my previous EVE Online post.

Best of all with the Vexor, and this way of fitting, is that everything can be upgraded. This is the platform which you can build upon as your characters skills develop and your in-game wealth increases. You can upgrade the ship to Vexor Navy Issue which is the same ship but better statistics. You can upgrade most of modules to tech II rather than tech I, making them more effective. Use tech II drones and even use the most powerful and expensive drone, Gecko. You could literally start with a 12 million ISK ship and end up, without changing the build or ethos of the ship, having a 400 – 500 million ISK ship, capable of dispatching enemies quickly and efficiently.

For me, this ship really is an all rounder and a workhorse. I would encourage any player to use all kinds of ships and fit them in all kinds of ways. Ultimately however, if you just want something which works and is easy, the Vexor is by far one of the best options which you can increase in power as you grow in the game.