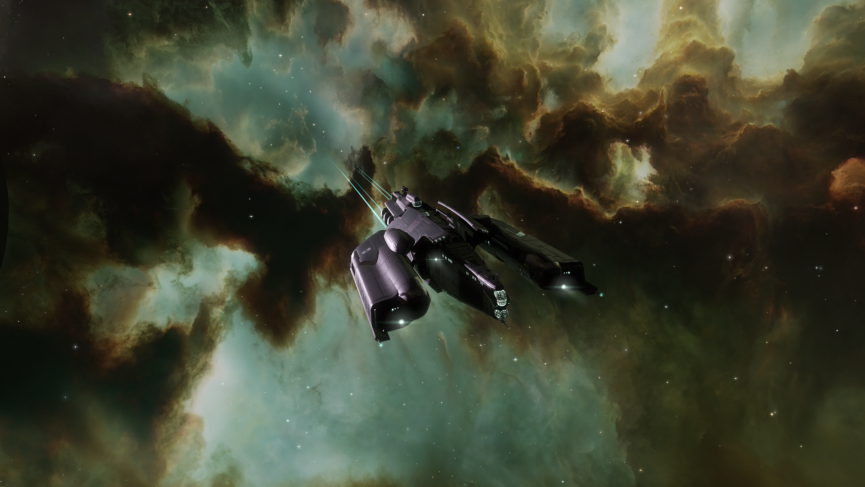 For the past week I have dabbled with a new character in EVE Online. I wanted to see just how much I could do in the game without paying a penny or by using my already established, yet dormant, wealth within the game.

I have to say I am pleasantly surprised by how much a new Alpha character can do and how much fun I have had playing one. To make things a little sweeter, each day over the course of 3 days a player logs in this weekend, they are given 25,000 skill points to use. This, in the grand scheme of things, isn’t a lot considering my highest skilled character has over 66 million skill points, accrued over the course of 3 years or more. For a new character however, it’s huge.

With my Algos (a standard and cheap destroyer class ship pictured above) I have been able to breeze though level 1 and 2 security missions and complete combat sites, some of which I have used probes to pinpoint the location. All very simple, easy content while I wait for skills to train in order to purchase better ships and complete harder yet more rewarding content.If you’re interested in how I fit my basic Algos:

Low slots
Drone Damage Amplifier I x3 – The Algos is primarily a drone combat ship, these are to boost the damage output of your drones as much as possible.

Mid slots
5MN Microwarpdrive I – This will give massive jolts of speed in order to get away from enemies and kite while your drones take them out. You can also use it to zone in on loot quickly but be careful to not use all of your capacitor.

Medium Shield Extender I x2 – Very basic, but two of these will help you tank some damage should you run into any trouble.

High slots
Core Probe Launcher I – To scan down cosmic signatures in order to find combat sites suitable for your Algos. If you take a mobile depot it is also possible to swap out a mid slot shield extender for a data or relic analyser should you scan down data or relic sites.

Rigs
Small Ancillary Current Router I – You may not need this but with low skills the Algos power grid would not fully support all of the above fittings without this boost of power.

Drones
Hobgoblin I x12 – These deal thermal damage which is good against Serpentis and rogue drone targets. Consider swapping all or some of these out for other light scout drones depending on the enemies you will be engaging.

The ship complete with the fitting will cost less than 2 million ISK (interstellar kredits, the main currency within the EVE universe). I simply kite the enemy NPC’s (Non player characters (known within EVE as rats)) and let my drones do all of the work. Players new to the game can have one of these within hours and in my view can get a lot done with it.

I do not know when or if I will ever start playing EVE Online fully again, but in the meantime, sitting back and chilling while playing this new Alpha character and watching it grow could be a lot of fun.

A new gameplay video has been released and I encourage anyone who is interested in EVE Online to watch it.

If after watching that you are still interested. Download the game and play it for free. You have nothing to lose.