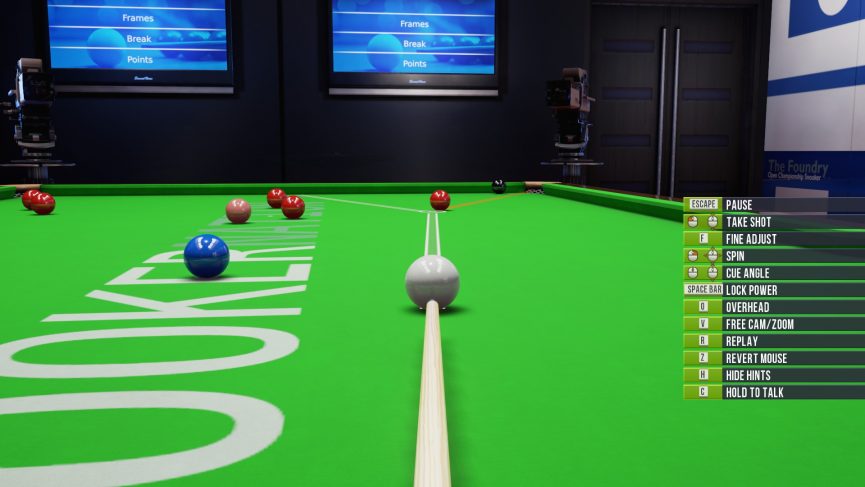 Once again my friend Jason and I played a best of 7 of Snooker Nation which, once again, he won 4 frames to 3. Considering at one stage I was leading 3 frames to 1, I am a little disappointed that I did not win this week.

I don’t think either of us played all that well. I didn’t feel well and Jason had just completed a long drive home after being away. We both missed some very easy shots and neither of us produced a century break. Jason did get close at one point with a break of 91 I believe.

Snooker Nation really does offer a level precision which allows us to perform shots that would otherwise be incredibly difficult and unlikely in the real world. Snooker professionals wouldn’t even bother with half of the shots we play. Not because they’re impossible, but because the chance of success is very low.

One amusing thing Jason does is when it is his turn to start the frame and ‘break’ he actually does not move any of the reds. He somehow manages to glance off of the right hand red at the bottom of the pack ever so slightly. What follows is the white hits the cushion at the end of the table and finds its way back up the table in the baulk end, often hitting the yellow. I don’t know why, but when he takes a shot intended to ‘break’ the reds but actually moves no reds and moves the yellow, I get a little bit tilted. I felt a little better when Jason played this shot but actually managed to pot the yellow, I was given 4 points and had a free ball. I potted the brown with the intention to be on the blue at an angle I could hit the reds, after potting the blue I missed everything and even managed to pot the white giving Jason 5 points. At this point we both had 5 points, the yellow, brown, blue and white had been potted but not a single red had moved.